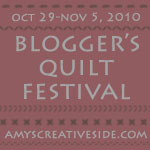 The Fall 2010 Blogger's Quilt Festival is going on at "Amy's Creative Side".  This is the fourth festival, but the first I've joined.  I'm looking forward to seeing all the quilts, especially since family obligations this year kept me from going to any quilt shows.

I have several favorite quilts, but decided to post "June's Tulip Garden".   My husband asked me to make a quilt for his mother.  She loves tulips and plants a yard full each fall to enjoy at Easter.  So,  I wanted to make her a quilt with tulips. 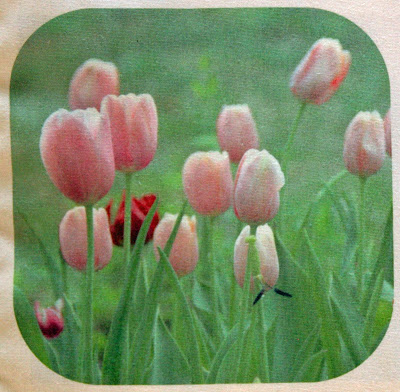 The Inspiration
I had seen a couple of block patterns in some of my quilting books.  But none of those were exactly what I wanted, so I designed my own block.  I ended up with four different 10" blocks featuring 2 tulips of varying height.  Each block had 30 pieces. 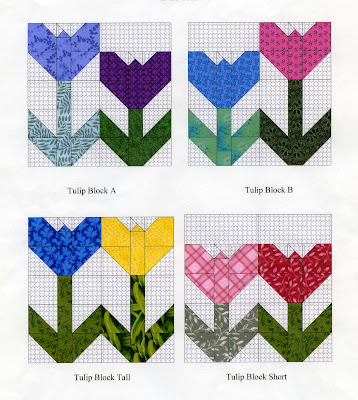 The blocks
I can only say that I must have been temporally insane when I started this project in 2006.  My original idea was to put the blocks together in rows, just like a garden.  That would have required 49 blocks total. 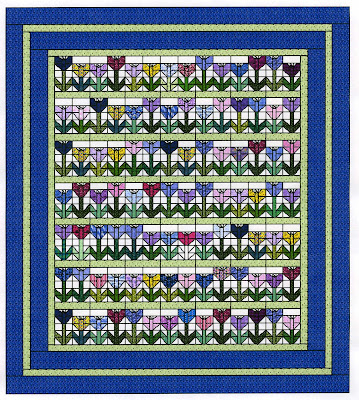 Two years of effort resulted in completion of less than half the blocks needed.  I took a hiatus to work on another project due to "tulip fatigue".   It was pretty obvious a different setting was required if I wanted to finish this quilt in my life time (much less my mother-in-law's).  So the final version of June's Tulip Garden" became a reality (with only 35 blocks). 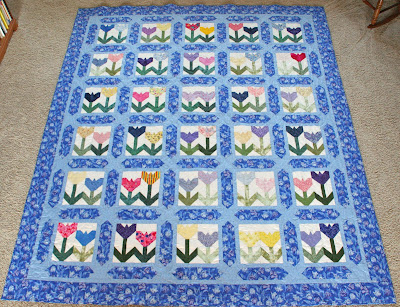 June's Tulip Garden
My husband gave his mother the quilt Easter Sunday 2008.  I wasn't sure how she'd take it, not everyone appreciates the effort. She was thrilled.  The quilt was on her bed before we left that Sunday and it's still there 2 years later. 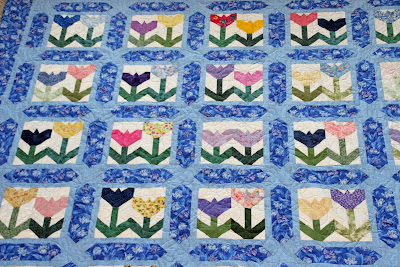 The quilting was done by Lesa Foreman of The Corner Sew and So.  It's hard to see in the picture, but it includes loops and swirls along with some very cool dragon flies.  I learned a lot from this quilt, it was the first that I designed completely myself.  I also learned how satisfying it is to have someone appreciate your efforts.  The look on my husband's face when his mother opened the package is a memory I cherish.  Though it was probably the most painfully drawn out project I've done, it was so worth it in the end.

Thanks for letting me share one of my favorite quilts.  Enjoy the festival!
Posted by Kate at 5:18 AM

So much work, but obviously worth it! I love your choice of setting color.

It is nice to have your work appreciated. You made a lovely quilt. And the best part is that you kept on working on it till it was complete.

A gorgeous design and quilt. The tulip blocks definitely benefit from having their own "viewing paths" round them :)

I loved seeing the creative evolution of this quilt Kate. The story was great as well. The finished quilt is fabulous.

Isnt it terrific when your hard work and blood sweat and tears is appreciated and loved!

FABULOUS design - this is a stunning quilt!

Thanks for sharing such a beautiful quilt. How true is it when you give a quilt that is truely appreciated.

It is a beautiful quilt and wonderful that you designed it too. I laughed when I read - I must have been temporarily insane - I can so relate to that with my own efforts.
So lovely to have your work appreciated too when so much effort has gone into it. Thank you for sharing your beautiful design and work.

That is such a beautiful story! You did such a great job designing that gorgeous quilt! Or should I say those 2 designs? Well done! I love them!!!

Sometimes reconsidering a project halfway through gives you better results than what you had planned originally. I personally think that by using that sashing you really showcase the blocks off well, and your quilt turned out even prettier than originally planned. And isn't it nice when someone appreciates your work? If your mother-in-law continues to keep this on her bed, it must mean she thinks about you a lot! And it really IS a lovely quilt!

Great story. It really is rewarding to give a quilt that you have put so much work into and the recipient really loves and appreciates it. I love it.

Congrats to a great quilt and a touching story! How good that you had the guts to change your plans. The result is lovely, and yes, it IS the best thing when the one who gets the quilt really appreciates it !!!

Lovely! This is a beautiful quilt and your tulips are part of a long tradition of pieced flowers. Anne Orr, a needlepoint, cross stitch and quilt designer in the 1920s and 30s was famous for her pieced flowers.

The story behind the making of the quilt is great. It's a wonderful quilt -- and the look on your husband and mother-in-law's faces must have made all that work worth every second.

love the story and the pretty quilt! Thanks for sharing both. :)

Wow thats a lot of hard work, I think you made the right decision to change plan, its lovely with the sashing and you can really see the tulips. Funny how quilts sometime turn out so different to what we expected.

Creating your own design is pretty complicated business isn't it.. I have added different borders and extended patterns but never done the whole thing from scratch. I like how you set the tulips surrounded by sashing. So glad that your mother in law loves it.
Giving a quilt, is like giving away a piece of yourself- It is so nice when the quilt is loved.

Hope you are getting a chance to look at some of the quilts - there are many beautiful ones to view.
Regards,
Anna

This quilt has turned out so well. Beautiful colours and a wonderful design. I really enjoyed reading about the process and changes you went through. What a wonderful gift!!

Your quilt is very beautiful! I love your tulip blocks and the blue sashing fabric - a great combination!

Isn't it neat how a picture can become a quilt. The modern quilt guild is having that challenge now. I love tulips so this is a very fun quilt!

What a great quilt you made. I am Dutch and I especially appreciate the tulips.
Greetings from France

All the work you put in certainly paid off, it's a beautiful quilt!! The design is really clever, I like that the tulips are different heights. I saw your comment at Quilting in my Pyjamas blog about only worry about the seams that you can see whilst galloping by on a horse- it made me laugh so much but I'll remember those wise words.

The tulip quilt you made for your mother-in-law is wonderful. I love the blue and white sashing that you put between the blocks. It makes it even more like tiles from Holland. It is wonderful that you created this just for her.

This quilt is beautiful!!! Love the tulips. Thanks for sharing!

what a great quilt. I love how it looks with the sashing between blocks.

It is so beautiful. Tulips are my favourite flower. I love the sashing.

It is a wonderful quilt - love your tulip block!

It's like having spring in the fall. Very amazing!

Kate, your quilt is beautiful! The design is breath taking! It's great to hear your work was appreciated! Such a colorful quilt, would be nice to have during the cold winter months!

I like how all of your tulips are scrappy!

Thank you for sharing this pretty flower garden. You did a lovely job designing it.

It is wonderful! I love the modified verision that you did so much since it really shows off the tulip blocks.

You created a beautiful quilt! I love the sashing you created to frame the blocks-- it is perfect.

I love the unique design of your sashing!

this is just a fantastic quilt! the colors are so vibrant and wonderful. honestly, i like it a lot more than your original design as the sashing sets it off so well. very luck mother in law and i'm so happy she loved it! thanks for sharing and have a great day 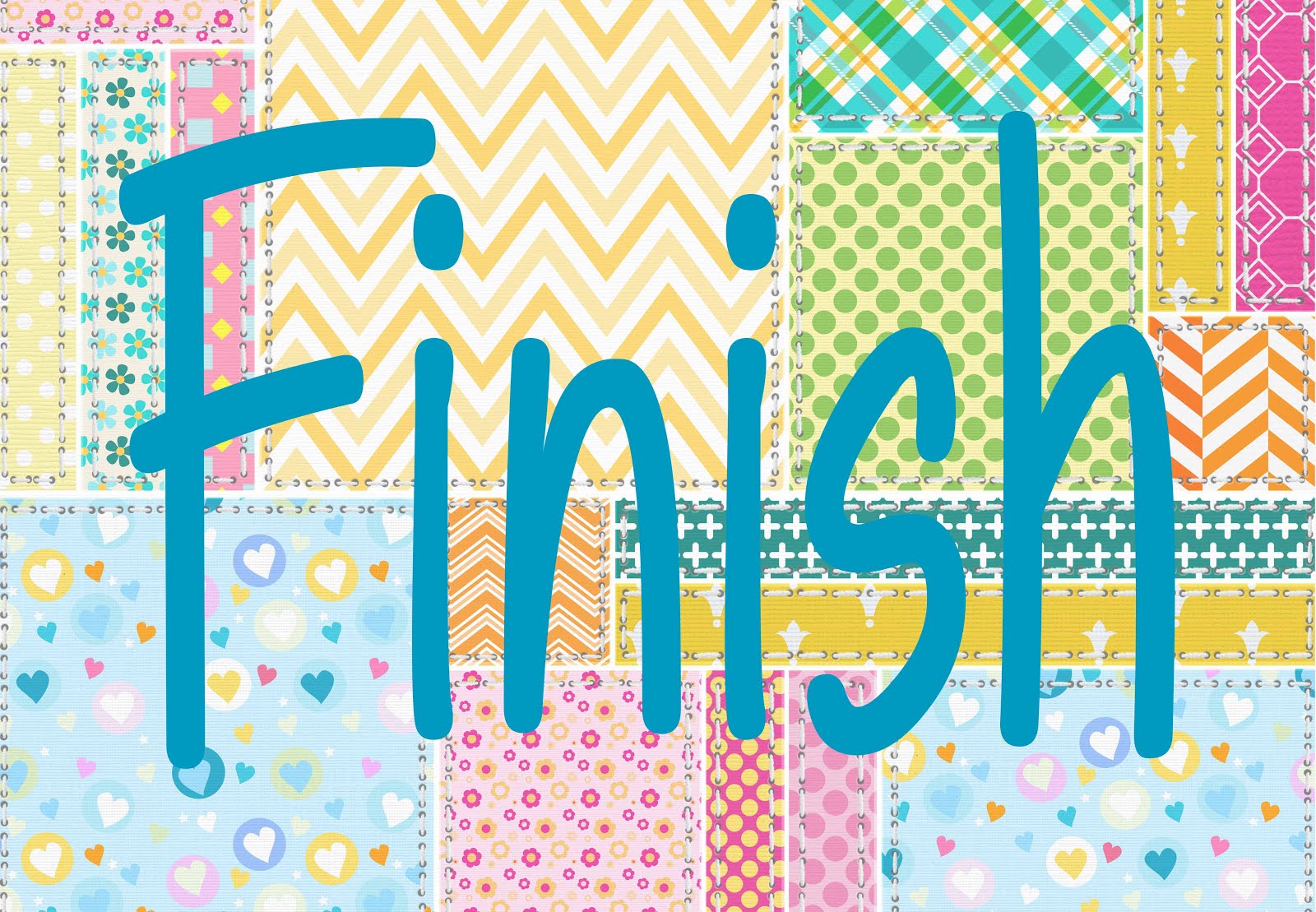 Kate
Welcome to Life in Pieces, my home in the blog sphere. Here, I share my love of quilting and photography, along with the occasional tale about Drama Teen, My Guy. 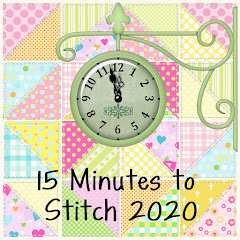